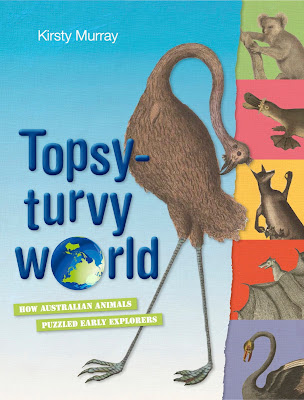 My suitcase weighs too much! Not because it has too many clothes in it but because I’ve just crammed half a dozen hardcover picture books into it. They should have gone with the Bookwallah travelling library that was shipped to Mumbai a couple of weeks ago. But somehow they managed to miss the boat.Updating my website is long overdue, including adding Topsy Turvy World – How Australian Animals Puzzled Early Explorers which was released this month. It’s the first non-fiction book that I’ve written since 1999 and was written entirely while I was on the road last year with the Professor and the puppets. I thought I’d never write another non-fiction title again. My first three published books were non-fiction but once I moved on to writing fiction, I thought I’d never have the time or inclination to write another. 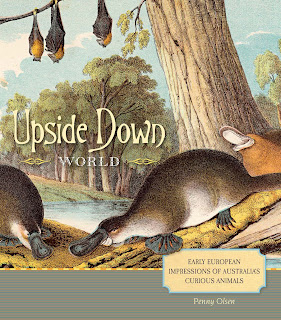 In 2010 as my ninth novel was being launched Susan Hall from the National Library of Australia approached me to see if I was interested in writing a book for the NLA.  At first I said “Maybe” though I was more inclined to say “No”. I had so many projects that I wanted to work on that a commissioned work was low on my list of preferences. But then Susan showed me Penni Olsen’s Upside Down World  and I was seduced. I’ve always wanted to write a lavishly illustrated picture book. Together we selected 15 chapters from Penni’s book representing 15 different animals.  I drew heavily on Penni Olsen’s in-depth work as well as researching the animals and their history and cross checking with naturalists to produce stories about the first interactions between Europeans and Australia’s crazy wildlife. Making the material lively and accessible for younger readers was demanding but satisfying work.

Originally, I thought it would be something I’d complete quickly but writing is never quick if you want to do it well. I wrote much of the book while I was at Bundanon but worked on it continuously throughout the year while staying in campsites all over Australia from Merimbula to Darwin to Fremantle to Albany where I signed off on the final proofs. I thought it would be a much more modest production but the book is totally LUSH – a huge, hard cover format with hundreds of full colour illustrations. The combination of narrative, facts and gorgeous pictures make it even better than I’d anticipated. It’s turned out to be a perfect gift for not only kids but overseas friends. But how many extra copies can I stuff into my suitcase?????