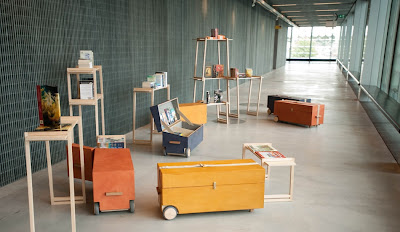 The Bookwallah Nomadic Library
I’m turning over a new leaf. I’m making lists. I’m packing my suitcase. I’m going to India. I’m getting back to blogging.

Three things have inspired me to set myself a blog challenge to try to write five posts every week between now and Christmas.

1.  My son, Elwyn. Elwyn is a graphic designer. Among other things, he designs Voiceworks magazine. Last month, Elwyn returned from the National Young Writers Festival which he’d attended with the Voiceworks team. He said he’d sat in on a lot of sessions where writers and artists talked about their practice and day-to-day routines.
‘Wasn’t that kind of boring?’ I asked.
‘No,’ he countered. ‘Hearing people talk about their lives and the mundane things that make up their day helps you understand what works and what doesn’t. They were my favourite sessions.’

It made me think about the fact that one of my favourite blogs is Penni Russon’s Eglantine’s Cake. Penni’s blog used to have a quote on it about the pleasure of gazing through lighted windows and into other people’s lives. I think it was a C.S. Lewis quote and I have probably mangled it but the gist of it was that the most ordinary things in other people’s lives can be interesting.

2.  The truth. About eighteen months ago I had a dream that I haven’t been able to forget. It was very simple. I was standing on a railway station platform and shouting “I just want to tell the truth.”
Truth telling is always difficult. I believe that fiction, at its best, attempts to tell the deepest truths. In writing for younger readers, it’s often tempting to put a gloss on things; to make the story upbeat, to err on the side of optimism. Adult fiction often veers in the opposite direction, sometimes telling stories of unbridled pessimism. Perhaps truth is a line as straight and shining as a railway track, a line that must be walked judiciously and with perfect balance. The more I write, the more I feel confections – whether light or dark – are a waste of time. A blog worth reading – like a book – should attempt to tell the truth.

3.  The Bookwallah Tour begins (for me) on Monday night when I fly from Melbourne to Mumbai. My suitcase, half packed, is lying on the floor of my bedroom. The Professor  has already departed. He Skyped from Delhi this evening full of stories about his first day back in India and all of a sudden the notion of the adventurous weeks ahead seemed very real. The Bookwallah tour will take me from Mumbai to Pondicherry – three weeks and 2,000 kms of travel in the company of five other writers. The Professor has his own itinerary to pursue but on 21st November – my birthday! – we will meet in Delhi to celebrate and begin the second leg of our adventure with the Bookaroo Children’s Literature Festival followed by a two week residency in Shimla.

I’m never really short on things to blog about. In any given day a book, a writerly dilemma, an interaction with a reader, or a literary event provides more than enough material to knock up a blog. But  the combination of those big three factors – that reading about real life is always interesting, telling the truth about the passage of days is important and that the Bookwallah tour is an amazing concept and a potentially life-changing experience – should provide enough impetus to keep me blogging regularly between now and Christmas.