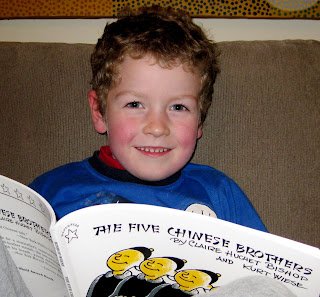 When I was in Canberra last month, I finally had the chance to visit the Asia Bookroom.
They are a fantastic resource for anyone interested in Asia and I’ve bought a number of books from them online. Even if I’m not in the mood (or cashed up enough) to buy something, I love browsing their collection online so it was great to actually check out the real, rather than the virtual, bookshop.
I gave my credit card a good thrashing while I was there and bought a stack of adult books. I also couldn’t resist buying a book for my great-nephew, Miles. I was surprised to find The Five Chinese Brothers on the shelf at Asia Bookroom. Published in 1938, it’s had its detractors over the years and, as an adult, I felt a little ambivalent about it for a number of reasons. Is it racist? Apparently it has often featured as one of the most frequently challenged books in American school libraries. But I absolutely loved it when I was a kid. It was one of those books from early childhood that actually made me feel excited that the world was so big and interesting. There were so few children’s books set in China that The Five Chinese Brothers seemed particularly special. So when I found it at Asia Bookroom I decided to swallow my misgivings and buy it for Miles.

Even though I’d re-read it in the bookshop, reading it to Miles made me see the book differently. The racial question felt like a non-issue but the whole drama of how the five brothers escape execution by using their magical abilities was very disturbing. I felt really uncomfortable having to discuss capital punishment with a four-year-old and was amazed that I had somehow managed to overlook that aspect of the book. A week or so after giving Miles the book, I had dinner at his house and we talked books, as we often do. I read him a new book about a kid who meets a group of funky fairies but I don’t think he was very interested in it. I asked him what his favourite story was at the moment. He immediately ran to find The Five Chinese Brothers and suggested we read it again. His mum had read it to him a couple of times that week. I could see the book had made a serious impact. It’s so easy to underestimate both a child and a story. Miles’ mother said he was also asking for the story of ‘Auntie Tigress‘ more often so obviously Chinese folktales are working their magic on Miles in the same way they once had for me. Perhaps it’s the disturbing elements in The Five Chinese Brothers – the ‘escape from death’ theme and the powerful connection between the brothers – that makes this book a classic.